For over 20 years I used alcohol as a crutch. I relied on it to make it through parties, events, and every day moments. I used alcohol to numb the feeling, understanding, and messages I was receiving that who I was as a person was perceived as wrong. The messages were saying to me: you are not equal or worthy. You and your identities are not welcome. You do not belong here.

Hiding My True Self

Where is ‘here’? Well, it was everywhere: in my little suburb in Columbus, OH, in my school, in my Jewish community including my synagogue, camp, Hebrew school, Sunday school. In the 80s and early 90s when I was growing up, there were very few out LGBTQ people in my small little bubble and certainly not in my Jewish spaces. Jews couldn’t be married to someone of the same gender in a synagogue (or anywhere) or folks who were gay and lesbian (don’t even think about being trans) couldn’t be ordained as rabbis. It wasn’t even until 2015 that the Union for Reform Judaism passed a “Resolution on the Rights of Transgender and Gender Non-Conforming People”…. The media had only negative queer representation. No one and no space were explicitly saying: You Belong.

Who was I? I always knew that I was different. I knew that I held queer identities but didn’t really have the language, understanding, or safety to talk about it with anyone. And because of the time and space in which I grew up, I learned to keep those parts of me hidden to stay safe.

To survive, I tried my best to fit in and be the nice, little Jewish girl everyone expected me to be. I went to Hebrew school, Sunday school, Jewish day camp, had a Bat Mitzvah (though, lord, I did not want one), was active in BBYO and then in college, my Hillel on campus. After much anguish, I came out as gay my sophomore year and became Hillel’s president of the Jewish Queers and Allies group. But once I graduated from The Ohio State University in 2007, I looked around and didn’t see any other Jewish spaces that were inclusive and celebratory of the queer community and so I chose my queer self over my Jewish self. Why should I invest in a religion that didn’t want to invest in me?

In choosing my queer self, I also chose drinking. Drinking was always at the center of everything I did. I started drinking in high school the summer between 9th and 10th grade in the year 2000. Instead of lighting Shabbos candles every Friday night, I went out with my friends and got hammered. I went to happy hours when I was old enough. When I moved to New York City in 2011 and started improvising 6 nights a week and drinking was an anchor with me and my friends. We drank before and after shows, after rehearsal, stayed out until the wee hours in the morning, woke up, rolled to work and did it again. Drinking became a ritual for me. It created a sense of belonging and community I’d been craving.

When I was 29 years old, I had a glass-shattering, a-ha moment that would change my life forever. I realized that I am genderqueer – not a man or a woman – and so much of my life finally made sense to me. No wonder I didn’t want a Bat Mitzvah – I didn’t want to become a woman because I’m not one. I backed out of Jewish overnight camp not because I would miss my mom but because I didn’t want to be in the girls’ bunk. Another realization I had was that after all those years, I was missing my Jewish identity. I was actively coming to terms with and learning who I was as a queer and trans person and I wanted to try and bring Judaism back in the mix. Enough time had passed that surely there’d been progress, right?

Through my work at Keshet, I met heaps of other Queer Jews and saw possibility of both self and community. I saw belonging in a way I never knew could exist. I met Jews who use they/them pronouns. I met Jews who were sober. I met nonmonogamous Jews. My world was opening up and in all the best ways possible. I started to heal my relationship with Judaism and I was doing it with a queer lens.

And yet, even through all of these revelations, I was still drinking. And why? Like I said, it’d become a crutch. It was an integral part of how I moved through the world and I couldn’t imagine what life could be like without it. I had too much social anxiety to get through without my crutch.

And then the pandemic hit, and I was faced with a quiet like I’d never had before. Even in quiet moments in the past, they were usually accompanied with alcohol because I didn’t actually want to hear my thoughts. But I pushed myself to be present with myself, for better or for worse, and in that quiet, I had two messages talking to me loud and clear that had previously been drowned in liquor: I needed to stop drinking and I needed to start hormone replacement therapy. Getting sober and starting testosterone were the two messages that scared me the most and it was time to throw them a life preserver and face them.

On June 1, 2020 I decided to stop drinking for a month to see if I could do it. I’d never gone more than two weeks in my entire drinking career without a drink so this, during Pride month and during a global pandemic, would be quite the challenge. And then I did it. So I kept doing it. And I never looked back (except, that’s not true). I look back all the time. It’s really hard to be sober. I miss drinking. I miss the burn of whisky in my throat and belly. I miss being the kind of silly that comes with lowered inhibitions. But you know what I don’t miss? Blacking out and being physically ill and constantly regretting decisions I made. Canceling plans and not remembering the incredible conversations I was having or people I met. Enough was enough.

Being My Full Self

I’ve had to re-learn what it is to be just me in all settings. Am I still funny and will people still like me? Turns out the answer is yes and maybe even more so. Sure, some of my friendships that were based in alcohol changed, but so many of my relationships have gotten stronger because I am stronger and more me. I show up for myself and others in ways I wasn’t capable of before. And I try to never shame my past self because I was doing what I needed to survive. Growing up in a cisgender, heteronormative world as a genderqueer trans person is incredibly difficult and I needed to escape to keep myself alive.

And now that I’m not out at happy hours every Friday? I light the Shabbos candles and breathe in the weekend and a sense of calm. I get to experience Judaism in ways that are affirming to me. I have seen what it is to be embraced and celebrated for who I am in my transness and Jewishness and soberness.

And when I think about that, every time it hits me, I can’t help but say out loud “I can’t believe it!”

Dubbs Weinblatt (they/them) is the Founder and CEO of Thank You For Coming Out which strives to inspire authenticity and belonging by uplifting, centering, and celebrating LGBQTIA+ stories and identities. They are a recipient of the GCN Impact Awards, were named one of Logo’s NewNowNext 6 Inspiring LGBTQ Jewish Activists You Should Be Following, and were recently named one of Jewish Week’s 36 Under 36. They are also part of the 2022 ROI Community cohort. 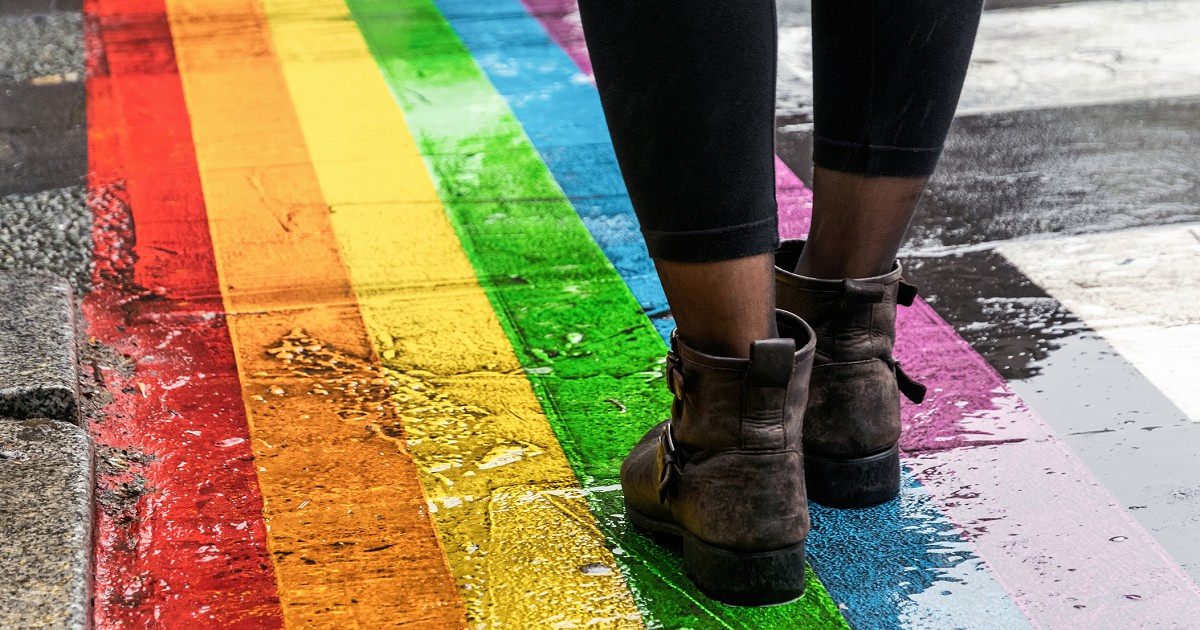